Named after Alexander Bogomazov (1880 – 1930), a Ukrainian painter and artist known for Cubo – Futurism and Spectralism artistic styles, and also for setting theoretical foundation of modern art.

Abundance of CNC machines is on the rise due to lower cost of components that make up these CNC machines. Even though there is a variety of open source software packages available to control these machines, most of them depend on a human to create the design before it could be sent to the machine for further operations like milling, cutting or 3D printing.

The vast majority of consumer grade CNC machines like laser cutters or 3D printers operate by reading a set of instructions from a specially formatted text file and executing those instructions. Because machines simply execute instructions line-by-line, they are not burdened by the complexity of the underlying design.

In this project I wanted to explore interactive ways to create very complex designs by using data sources such as image sensor data (camera). I set out to build hardware and software that a person can interact with to create drawings of “selfies”, for the following reasons :

In short, BOTomazov is a combination of a CNC Machine (drawing robot) and software driving the robot. The software is designed to capture a photo from a web camera and turn that photo into a drawing that is performed by the drawing robot. Because robots are just executing a set of instructions, the drawing is made to be complex, almost impossible for a human to draw by hand.

For the particular style of drawing, I chose to turn a photo into a set of horizontal lines with the following algorithm, inspired by Gregg Wygonik’s SquiggleDraw:

Below you can see an input image and a drawing that’s generated using this algorithm:

BOTomazov consists of the following components:

Functional Diagram of the whole system is presented below: 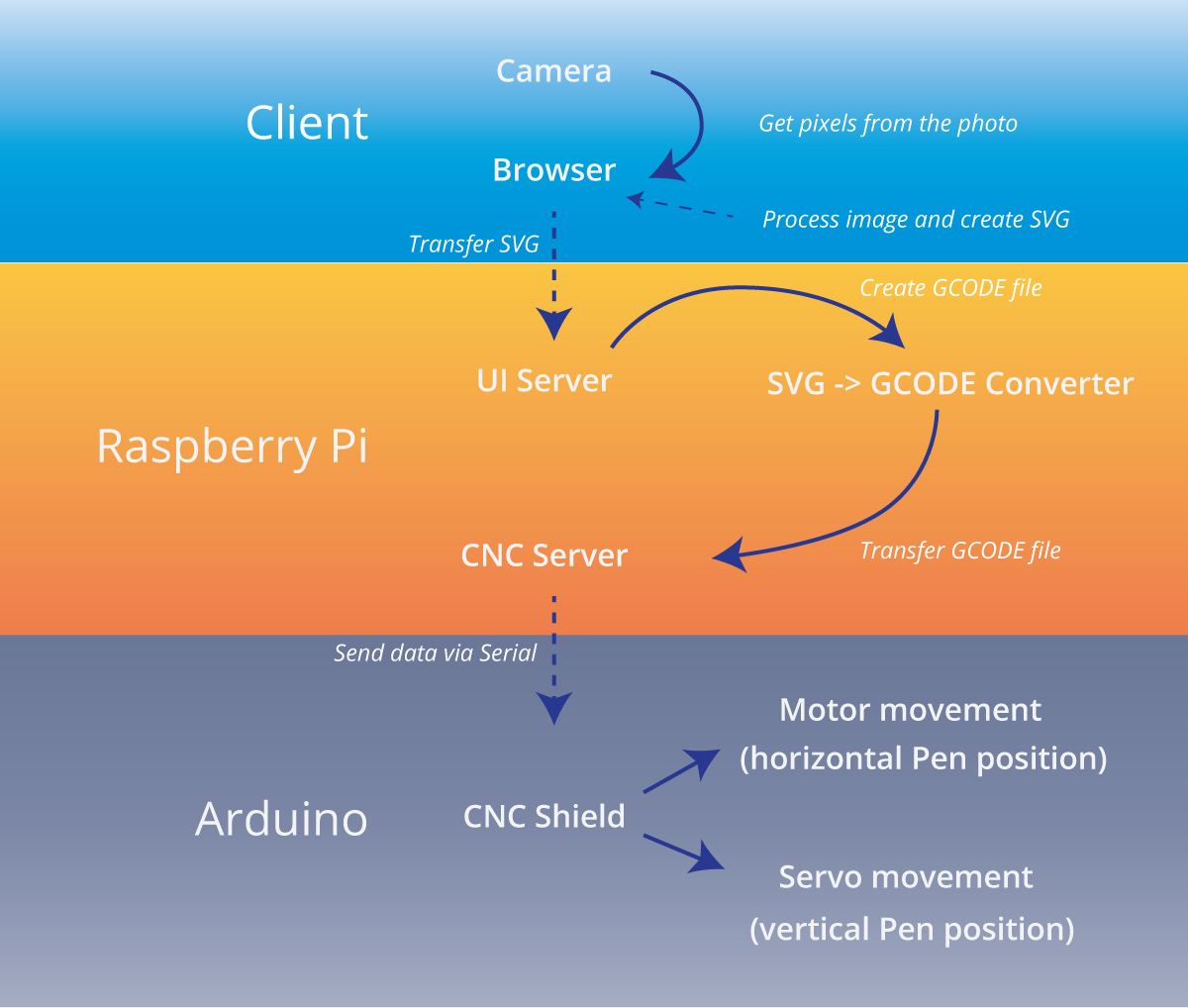 The following technologies were used to creating BOTomazov hardware and software:

BOTomazov’s user interface consists of the following components (that could be seen in action here: https://youtu.be/TN1vsZTuDFk ):

Below is a screenshot of the user interface, as it appears on a tablet that also acts as a camera for “selfies”:

Changing the values of the sliders affects the resulting drawing in the following way:

For example, here’s the rendering of the same image with a high number of horizontal lines on the left (90 lines) and low number of the lines on the right (45 lines):

Please see this video below for a quick overview of all sliders:

For the evaluation of the product I chose two users to try to interact with the user interface and set up the following tasks that help me understand whether the product is useful and which pain points it currently has:

For each of these tasks I set up the following criteria of evaluation:

I performed an evaluation with three users and consolidated their feedback as follows:

Potential Improvements to this product:

Choice of the problem:

I chose this problem because I noticed a lack of tools for making complex designs for CNC machines and saw potential in using web technologies for creation and testing of complex drawings. I wanted to study creation of the whole pipeline for a CNC machine that could be later developed into a complete product:

During this process I have achieved the goal of creating hardware and software from scratch and developing a functional platform that can be extended and transformed into more practical CNC applications.

Choice of hardware and software tools for implementation:

I chose Javascript and Python as main languages for the whole project for a few reasons:

I chose to give the users a minimal set of instructions and listen for their voice-over on every step of the way during the evaluation so that I could consolidate that feedback and improve the application.

The user-facing application had only one screen but even then, during the evaluation I discovered that there could be some confusion over certain UI elements. In the future I’d start designing and testing in more iterative way.

I spent many weeks working on this project, sometimes getting carried away by optimizing the software for greater speed. I also made sure to meet in person with some experts behind the algorithms that I was using and get their permission for use in my project. That was one of the most beneficial things for me personally because I got to talk to people that inspire me.

This was a heavy project for one person because it contains a lot of moving parts (no pun intended). Because of complexity, each week I created a todo list of tasks that would bring me closer to completion of the whole system. I had to stay up very late a few nights to manage the bugs and to implement improvements that were on my list.

Published source code for the SquiggleCam, a browser based software that takes image as an input and generates line drawing to approximate the image. The resulting SVG file can be used on a pen plotter, laser cutter or other CNC machine!